You are here: Home / All Posts / Maybe fish who have bicycles respect the value of other fish more highly

Starbucks has these little inspiration quotes on their paper cups. Some of them are odd, some of them are worth a moment’s thought. Newt Gingrich, for instance, is quoted as saying that “in the battle of ideas, winning requires marching toward the sound of cannons” (from memory – can’t find it online.) That’s good advice for anybody on the side of traditional families, these days – criticism means you’re goring sacred cows, which is in our case a good thing.

On cup #256, we have a gem from Gloria Steinem, and this is a direct quote since I’m holding a macchiato in my hand: 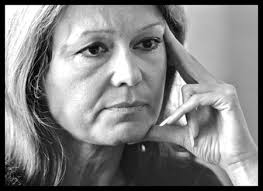 This is one of the more ridiculous things I’ve seen attributed to her, and there is plenty of competition for that title. Could anyone who has given birth seriously think this way? Feminism, with its championing of risky birth control, unlimited abortion, and the proposition that women should be as promiscuous and callous as men at their historical worst, places far less value on women’s bodies, never mind their hearts and souls, than the good old patriarchy ever did.