You are here: Home / All Posts / You call them pollsters, I call them something else 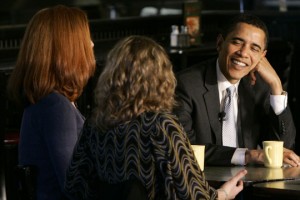 NARAL released the results of what they consider a poll last week. I’ve always understood a poll to be a collection or sampling of opinions. NARAL may have been giving more opinion that they were hoping to collect.

Here are the descriptions used by the pollsters in survey calls made to women between May 29 and June 8:

Obama: “Barack Obama believes that the decision to have an abortion is profoundly difficult for women… As president, Obama… will work to reduce unintended pregnancies through prevention and education…”

McCain: “John McCain is pro-life, and on the issue of abortion, he opposes a woman’s right to choose… As president, he will nominate Supreme Court judges who will vote to overturn Roe v. Wade…”

Doesn’t Obama sound like a stand-up guy, full of proactive ideas? Meanwhile, McCain comes across like a stuffy politician, in the worst sense of the word. Imagine what a pro-life group with as many scruples as NARAL would come up with. Reminding women of Obama’s support of late-term and partial-birth abortion, using terms like ‘killing unborn children,’ would definitely be a priority.

Alas, a pro-life group would never get away with it. But NARAL seems to. We aren’t plagued with this sort of double standard in Canada, are we?