You are here: Home / All Posts / Redefining bravery

Many evenings over the past months, my husband and I have been watching CBC’s A People’s History of Canada. It’s been fascinating to learn about those who built this country when there was nothing but wilderness. Without going into details, it took a lot. One pioneer woman was making the move from London, England to join her husband in the Canadian prairies in the late 1880s. First things first, she got all her teeth pulled and dentures made. The prairies held opportunity, but no dentists.

Our own grandparents had a different mentality of duty and sacrifice. They sacrificed a lot to make ends meet and raise families.

We don’t do that today, not always, anyway. The linked Chatelaine article is the story of a fairly well-established, married woman in her 30s who has two kids and aborts the third. She later goes on to birth her fourth.

It’s an old story: yes, we get it, EVERYONE is doing it. Thus we see how the abortion regime has no logic. For the point of stories  like these is to do two incompatible things: one is celebrate the normalcy of abortion for EVERYONE, the other is declare women who get abortions and talk about it to be very, very brave.

My point here is to reflect on her need to go public and thereby collectively redefine bravery by writing this article. She gets her accolades in the comments. (Although some, oddly, chastise her for having a glass of wine when she finds out (!?) and others criticize her for getting pregnant if she didn’t want to be. I don’t think I need to tell this audience that precisely none of these are a pro-life reaction.)

When she gives life to her fourth, it was without the sense of doom, she says.

When facing doom, when facing hardship, our response these days is to eradicate the hardship. In the past, the idea behind courage and bravery was to withstand and come out the other side a changed and/or better person.

One final comment: post-abortion, she mentions meeting up with a friend who “was trying to have another baby and had suffered several miscarriages. I didn’t dare tell her about my day.” I’ll say. I know what I would have said to her. And it wouldn’t have been pretty. But why not confess to her too? Is it because the burden of saying I just killed my child while you would so love to have one is awkward? Is that not part of the journey of sharing, together? Is this not part of “avoiding holding our collective breath”? Or might it just be indecent to put this on someone in that circumstance? And if, just if, it is indecent to do that in those circumstances, then why for the love of all things good in this world, is it AOK to force this indecency upon us via a widely read magazine?

This is why pro-abortion “sharing” is now–and always will be–counter-productive.

To conclude, some advice for pro-choicers: Abortion in your worldview is either normal, or brave, but it isn’t and can’t be both. 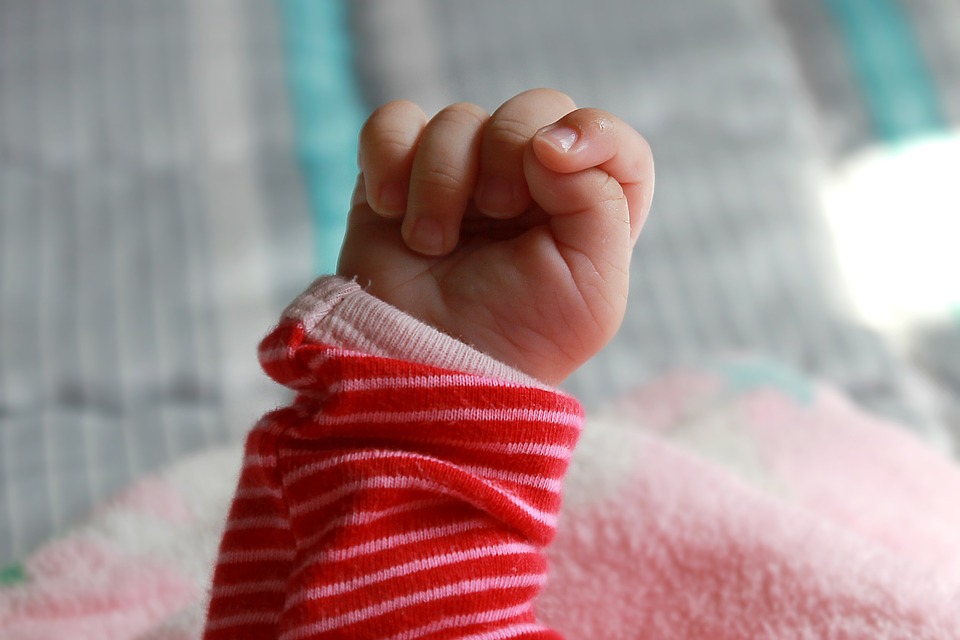 This may look cute, but it’s actually a defiant baby fist, raised high. If I could have found a photo with the third finger raised, I would have posted that. The problem with the pro-life movement is that babies can never join a union and protest their own mothers and fathers.