You are here: Home / All Posts / Victoria March for Life photos

I took some photos as well from our March for Life. I couldn’t say how many people were there, but it was the biggest turnout we’ve ever had (and while we were there they announced that Ottawa’s was as big as ever as well, very nice to hear!).

The march started out in a very packed Centennial Square (city hall). I wish I had brought my wide angle lens with me to capture it better! 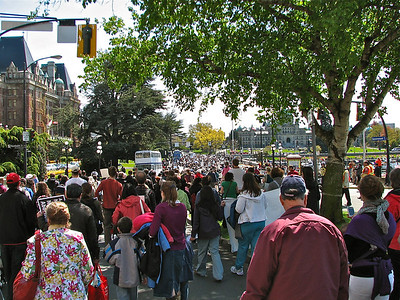 Walking down Government Street, the end in sight. It was a little more crowded than usual (well, for a Thursday) since at least one cruise ship was in port.

Arriving at the legislature lawn. We could not have asked for better weather. The forecast threatened thunderstorms, but we didn’t see a single raindrop and the temperature was perfect (strange, because it has been an unusually cold and rainy spring).

As far as I could tell, the orange sign there was the only anti-March for Life sign there. I wonder if anybody else around knew that one of the people holding the sign actually benefits financially from assisting in abortions.

Unfortunately I didn’t get any good photos of the speakers since I was at the very back of the crowd. You can view all the rest of my photos here though. Overall it was a very great, positive event. I went to the banquet afterward in the evening which was even better because I could hear the speakers (Rebecca Kiesling and Alex Schadenberg) better than at the rally, both of whom were inspirational and informational.