You are here: Home / All Posts / A new media target: Michele Bachmann 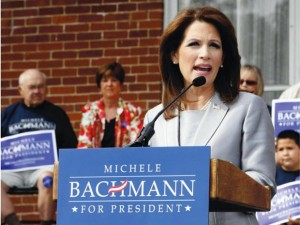 Here we go again. Seems to me that there truly is a double standard. President Obama was able to get away with getting the number of states in his own union wrong, as well as saying he was looking forward to meeting the president of Canada. His vice president is known for making factual errors.

But when Michele Bachmann gets John Wayne’s birthplace wrong, well then. This is news:

Bachmann officially launched her campaign Monday in her hometown of Waterloo, Iowa, but got a key fact about the city wrong during advance publicity for the event.

‘Just like John Wayne was from Waterloo, that’s the kind of spirit I have,’ Bachmann told a TV interviewer, referring to the iconic movie star.The only problem? John Wayne was born in Winterset, Iowa. Waterloo was once the home of serial killer John Wayne Gacy, who was convicted of raping and murdering 33 boys and men in the 1970s.

I don’t know a lot about her. What I do know sounds impressive. She’s an attorney, with five kids, who also took in foster kids. It’s hard not to feel like there’s already a media campaign mounted against her.

What would it take for the media to be disinterested observers? Is that too much to ask? Or to do investigative reporting that doesn’t involve slamming Christians for being Christian? (I didn’t read too far into that last link. I did find it funny that apparently the author takes it as some sort of strange apocalyptic sign that Bachmann thinks God is calling her to run for the nomination. Newsflash, newsflash, pull out your notepads hostile journalists: Every practicing Christian out there thinks God is calling them to do something, and has placed them where they are for a reason. Believer or not, that’s the story of the Bible from start to finish: the idea that God uses people, aka us, to work in this world. So it’s not just crazy Republican candidates. I’d hazard to say Jimmy Carter thinks precisely the same thing.)

Anyway. I’ll reserve judgment until I know more but headlines indicating that Michele Bachmann doesn’t know where John Wayne was born do not disturb me. Sorry.