You are here: Home / All Posts / Beware of the pro-choice echo chamber

Ten years. I have been doing pro-life activism for ten years. (I feel old just writing that…)

I have always been 100% pro-life, because I am convinced that is the only intellectually consistent position to hold. Unsurprisingly, when I first started my journey into the realm of pro-life activism, I had many pro-abortion advocates challenge my absolute pro-life stance. They presented complex arguments and asked difficult questions:

What if a woman is sexually assaulted? What if there is an ectopic pregnancy? What if a 10-year-old child becomes pregnant? Will you still condemn abortion in these situations?

Whether the pro-choicers asking these questions really wanted to hear my response or not, they were successful at drawing my attention to the complexity inherent within the abortion debate. Admittedly, at the young age of twelve, my burgeoning pro-life activist self had not yet considered these nuances. And so, spurred on by the desire to find answers to these ambiguities, I committed myself to research, intellectual curiosity, and the pursuit of understanding. Over time, I developed a well-informed, comprehensive, bulletproof pro-life message.

And then, after a few years of pro-life activism, I came to the fateful day when I realized that there were no new arguments or questions anymore. Each “new” question was simply a recycled, repackaged repetition of a question I had already answered. And no matter how hard I tried, I could not find a new challenge to end this perpetual cycle.

I was stuck in what I have come to call the “pro-choice echo chamber”.

The pro-choice echo chamber is a place where the same meaningless slogans and mindless mottos are repeated over and over again, where there is no growth, no development, no opportunity to improve, just the same empty words reverberating through hollow corridors, being used and reused and used again.

And so the pro-choice echo chamber continues.

I have heard it all. Perhaps that sounds arrogant, but it is true. After ten years of listening to pro-choice rhetoric, I have come to conclude that there is nothing new under the sun.

But two weeks ago, something miraculous happened…

Eventually, we came to the subject of abortion. After outing myself as being a pro-life absolutist, we began an hour-long conversation on abortion. The conversation was remarkably respectful, incredibly thought provoking, and refreshingly coherent. And then, for the first time in approximately seven years, I was asked a question that I could not answer.

Now, to be fair, I actually did have an answer. When I was asked the question, I offered my usual, polished, well-rehearsed response. But instead of my fellow pro-lifers nodding their heads and the opposing pro-choicers shaking their fists, the students around the table thoughtfully considered my words. And then, rather than devolving into emotionally-driven retorts, they pushed me further, challenging the premises of my reply, inquiring further about my line of reasoning, and pointing out inconsistencies between my default response and my absolute pro-life stance.

I was surprised. And impressed. And, believe it or not, incredibly thankful.

Because here’s the thing: I love being challenged. Nothing breeds growth, development, and strength like the persistent presence of civilized, coherent challenges.

It’s a universal truth: the existence of resistance creates the opportunity for improvement. This is true of physical strength and emotional fortitude, but it is also true of ideological advancement.

The unfortunate reality is that, despite the fact that I have purposely pursued pro-choice friendships—in part to avoid the dangers of the pro-life echo chamber—many pro-choice individuals have never welcomed ideological resistance, and so they have little to offer in that department.

To be clear, I have seen this in the pro-life movement as well, so I am not suggesting that this is a uniquely pro-choice phenomenon. However, because all mainstream spheres of our society—including education, academia, politics, media, business, entertainment, and law—buy into the pro-abortion ideology, the pro-choice echo chamber is validated, rather than shunned. It is embraced with open arms, welcomed without critique, and deified rather than destroyed. And for that reason, the pro-choice movement has become condemned to perpetually suffer from intellectual inconsistency and a lack of rhetorical creativity.

In short, the pro-choice movement is stagnant.

If you are pro-life, guard against these phenomena by surrounding yourself with intellectually curious pro-choice individuals who are willing to consistently and respectfully challenge your ideology.

If you are pro-choice, guard against the desire to repeat meaningless phrases or regurgitate mindless sayings by pursuing pro-life friends who promote constructive and civilized conversations.

I have adopted this approach in my activism, and I have never once regretted it. I am more consistent, intelligent, and coherent because of the pro-choice ideological challenges that I have faced and—thanks to some brilliant pro-choice friends—I now face again.

And now, if you’ll excuse me, I have a new challenge to consider. I will let you all know when I am ready to reveal my response.

Until then, stay intellectually curious and ideologically consistent. 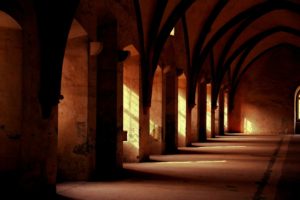