You are here: Home / All Posts / Euthanasia may be coming to a hospital near you

The frightening prospect of legalized euthanasia seems to be coming at Canadians like a tidal wave.

It has already happened in Quebec this summer when euthanasia was legalized thanks to the efforts of Ms. Hivon.

“The approach we took was one of health care. We should not leave anybody suffering at any stage, so why would it be okay at the end of life” she is quoted as saying in a Globe and Mail article on October 9th. “Our bill is about people who are ill and who are suffering and who need to have their pain alleviated.”

Unfortunately “alleviating suffering” for Ms. Hivon is synonymous with murder.

Yesterday the Supreme Court heard testimonies on why assisted suicide should or should not be a human right.

Government lawyers defending the Criminal Code prohibition of euthanasia were grilled by the Supreme Court Justices. According to one source, Joe Arvay for the Carter side (read pro-assisted suicide/euthanasia) had the court’s ear a bit too much.

In a recent Globe article, Prof. Jocelyn Downie a known, avid pro-euthanasia advocate: “The issue of provincial jurisdiction is squarely in front of the court.”

If the Supreme Court does rule that the Criminal Code prohibition against assisted suicide is unconstitutional, Prof. Downie says that the federal government will then “know what it can and cannot do in drafting the new legislation that will be necessary.” Simply put, the Federal Government won’t have a leg to stand on and euthanasia/assisted suicide will be the order of the day. 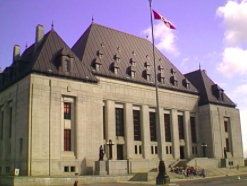