You are here: Home / All Posts / Word of the day

com·pla·cen·cy: self-satisfaction especially when accompanied by unawareness of actual dangers or deficiencies. (Thanks, Merriam-Webster)

It means that you naively feel good about something but that maybe with a little more awareness you might not feel so good about it. I can think of quite a few abortion related uses for that word. How about not knowing what abortion really does (the unborn are just a “bunch of cells”)? Or how about not knowing Canada’s unrestricted law (or lack thereof)? I would say that there is a dangerous sense of complacency surrounding abortion and that abortion rights activists might like to keep it that way. What I wouldn’t say is this,

Pro-choice activist Rolanda Ryan said the head count might be misleading, as there is what she called “complacency” among many Canadians about existing laws that make abortion legal.

“I think we just need to counter the anti-choice protest, and let everybody know there is a lot of people who support women’s rights,” she told CBC News.

Amy Ryan, who described herself as a Catholic, said she felt compelled to stand with the pro-choice side.

“I fast for Good Friday,” she said. “He died so that we could have a choice …I respect their right to protest, but it’s Good Friday, and [they are] ruining my day.”

But of course there can’t be complacency about existing laws if so many Canadians still aren’t aware of them. It’s the reason we protest in broad daylight on busy streets, to spread the word. Yet once again, a peaceful abortion protest with over 100 participants is forced into the background for an article focusing on the minuscule but more boisterous group of pro-choice demonstrators.

Demonstrators, I might add, who are as wrong about complacency as they are about The Passion. I’d rant heartily about why He didn’t die “so that we could have a choice”, but I don’t want to let one silly protester ruin this incredibly important day in the Christian calendar. 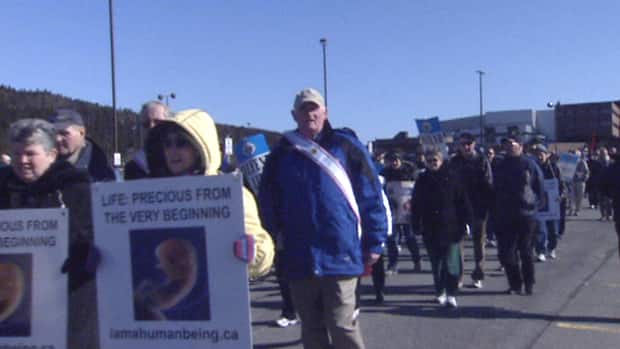 Andrea adds: Reading “He died so we can have a choice” actually made me grimace. However, I won’t let it ruin my day, since He died for my flaws, mistakes, sins–and hers too. And that’s good news.