You are here: Home / All Posts / You’re offended, I’m offended… so what? 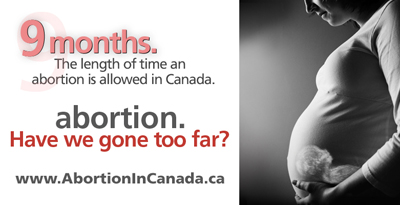 All it took was a couple of complaints and Don Hull, Hamilton’s director of transit took the ad above down.

Councillor Brian McHattie said he asked for the ads to come down after his office heard from upset residents. “For me personally, it definitely was offensive.” Personal opinions on abortion aside, he said the city shouldn’t been seen to support or promote either side of such a controversial issue. “It’s totally inappropriate for the city.”

What part of “have we gone too far?” is offensive? Your answer might be no, it might be yes, it might be a shrug – which is to say, you never pondered it before.

I’m offended that they took the ads down. But I don’t suppose that means they’ll put them back up.

What is it about “being offended” that has become sacrosanct these days? Since when must we not offend? Life without offense would be very boring, as I’m sure any hockey fan will agree.

Shutting these ads down because a simple question was posed? I think that’s “totally inappropriate.”