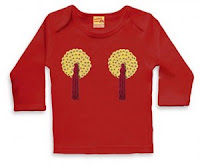 New “toys” and accessories for toddlers: Nipple tassels and poll-dance dolls. That’s got to be a new record.

A columnist makes an interesting case:

At first blush there’s no difference between an honour killing and any other murder. If a woman is killed for insurance money or for honour, she’s still dead.

But on closer analysis there is a difference and an important one.

Killing a spouse for insurance is brutal and monstrous but it is an act only focused on the deceased.

An honour killing is part of an organized effort to subjugate women to a specific and oppressive view of society. Although the total number of honour killings in Canada is still relatively small, probably less than 50 in total to date, the impact on the community as a whole is huge. When compared to a worldwide figure of perhaps 5,000 honour killing a year the implied threat is heightened.

I often wonder where feminists are on this topic, and they usually answer that if only I knew how to Google I’d know. Which is funny since intense Googling usually brings me to posts from feminists complaining about people like me Muslim-bashing, which, regardless of what you think of my motives, has little to do with the matter at hand – namely, what are we doing right here in Canada to make sure all women are protected from that kind of violence. So this morning I will refrain from asking about the whereabouts of feminists and just say that I’m glad the Sun published that column.

Here’s a blog entry from SciFi site io9.com, about anti-TV messages in new and old TV shows. It touches on a lot of issues, including reality TV:

Network also raises an important question that many other anti-TV stories deal with. Why is reality TV so evil? It’s partly because reality TV turns surveillance into entertainment, but also because it encourages people to look at each other as fictional characters. Either way, human life is devalued.”

I don’t watch pulpy TV for guilty enjoyment as much as I used to; whether it’s gotten tawdrier, I’ve grown up, or I just don’t have the time to indulge, I don’t know.
It’s worth thinking about both of these points, though: reality TV erodes our ideas about the divide between public and private, even if the subjects give their consent, and it does have the effect of lending detachment to human experiences, positive and negative. Do people become more promiscuous, less committed, and callous towards others as a direct result of watching reality TV? Probably not. But do we become desensitized by treating as entertainment such things as marriages unravelling (Newlyweds, Jon and Kate), the quest for love and/or Jacuzzi sex (The Bachelor/ette franchise), parenting (Jon and Kate, Super Nanny), back stabbing competition (The Apprentice) or the quest for fame and fortune (American Idol)? It’s hard to imagine that we’re not influenced by it.

I know; it’s not exactly a new point. But it’s good to see more and more people making it, because it’s true.

Barbara Wilding, the longest serving female chief constable, said that a growing rift between young and old generations, combined with the pressures of an ageing population, is a significant challenge for police.

“Elderly abuse is something that we have yet to really grasp,” she said in an interview with The Daily Telegraph. “It is one of the things that I think will be the next social explosion.”

She drew comparisons with the first discovery of widespread child abuse in Britain in the 1970s, and said that the abuse of the elderly was “the same sort of social issue – it can be covered up and the victims do not have a voice.”

Asked about the potential impact of changing the law of assisted suicide, which is currently illegal, Miss Wilding replied: “From a policing perspective we need to be very careful on this to make sure it does not become a way of getting rid of a burden. I will be watching any change in legislation very carefully”.

From time to time I check The Shotgun. This week, I note that their most highly commented post is about breastfeeding in public.

I suppose I should have an opinion on this. I figure a baby’s got to eat, and if the mom is comfortable doing it in public, go for it. We don’t live in a modest age, and if I’m going to see nudity everywhere I look, I’d rather it be because a mom is feeding her baby than the reasons I see it now.

A clinic in China offers half price abortions to students who show their ID. At least in China abortion providers are honest about the fact that they’re running a business. North American abortion clinics, by contrast, dress themselves up in the robes of feminism, women’s health, and compassion, and sell quick fixes that wreak a lifetime of damage.

If abortion providers marketed themselves as offering a service, rather than women’s saviours, perhaps they would not be so resistant to complying with basic safety regulations.

A fine column, if somewhat discouraging:

A few years ago, Kenneth Minogue of the London School of Economics wrote that ours is the age of “the new Epicureans” in which the “freedom to choose” trumps all. A childless couple can choose to conceive. A female couple can choose to conceive. A male couple—Barrie and Tony from Chelmsford, England—can choose to conceive and both be registered as the biological fathers of their children not so much on the technical grounds that they had “co-mingled” their sperm before shipping it out to their Fallopian time-share in California but out of a more basic sympathy that this is how Barrie and Tony “self-identify” and it would be cruel to deny them. A woman in Bend, Ore., can choose to become a man, and then a “pregnant man.” A man can choose to become a woman. A man can choose to get halfway to becoming a woman, and then decide it’s more fun to “live in the grey area.” Biologically, Barrie or Tony, but not both, is the sole father of their child; the “pregnant man” is pregnant but not a man; the he/she living in “the grey area” is in reality black or white—at least according to what we used to call “the facts of life.” But issuers of passports, drivers’ licences, even birth certificates and no doubt one day U.S. Department of Homeland Security visas now defer to the principle of “self-identification.”

In terms of sexual identity, we’re freer than almost any society in human history, at least in terms of official validation of our choice to “redefine” ourselves in defiance of biological and physiological reality. And yet, if you accept that infertile couples and gay couples should be free to “have” babies by means of technology, why should you not be free to sell them the semen that enables them to do it? If you suggest that, say, “partial-birth abortion” (which is actually partial-birth infanticide) ought to be illegal, feminists will be out in the street chanting, “Keep your laws off my body!” and “Keep your rosaries off my ovaries!” But, when the government tells you you can’t sell your own bodily fluid, which is, after all, about as basic a personal property as anything, there are no outraged progressives to chant “Keep your legislation off my ejaculation!”

At some point we will come to see that the developed world’s massive expansion of personal sexual liberty has provided a useful cover for the shrivelling of almost every other kind. Free speech, property rights, economic liberty and the right to self-defence are under continuous assault by Big Government. But who cares when Big Government lets you shag anything that moves and every city in North America hosts a grand parade to celebrate your right to do so? It’s an oddly reductive notion of individual liberty. The noisier grow the novelties of our ever more banal individualism, the more the overall societal aesthetic seems drearily homogenized—like closing time in a karaoke bar with the last sad drunks bellowing off the prompter “I did it My Way!”

So a Czech broadcaster takes it all off because she lost a bet? When I lived in Prague, there was a standard clip on the nightly news involving a naked man or woman (it’s not degrading if both genders do it) who would then put on the clothes you needed to wear, depending on the weather. Get it? Very instructive.

(I’m not kidding–the word “počasí” (pronounced “po-cha-si,” means “weather”) would appear amongst seductively swirling clouds. I will add that not all Czechs think this is a great idea. Though my sister wanted me to tape it, because she was very incredulous that a news broadcast would feature such a stunt.)

Brigitte would like to put on her famous crusty old goat hat: And remark that nowadays, it seems like you need an excuse to keep your clothes on, not to take them off in public.

Sure thing. I’m sure this is how the new gene-replacement technology will be used:

The only way to treat these defects is to replace the genes,” he said. “This is gene transfer involving the germline, which is a concern, but we are pursuing it not for general use but for patients with mutations they will pass to the next generation. We believe this technology will prevent that.”

Just like abortion is only used in the most rare and extreme circumstances, and invitro fertilization is only used for patients who had to undergo chemotherapy… (Filing this one under “Eugenics” for your further reference…)

Or maybe it’s just me cackling. For I find these women funny. First they get all puffy about feminism, then they advise women on the proper care and feeding of husbands (if you’ll forgive the expression – thanks, Dr. Laura), which apparently includes picking up their socks and making them coffee. Which perhaps goes a touch far the other way. Still, this feminist has finally realized one thing worth realizing:

Asked if she thinks feminism has destroyed women, the author of The Lives and Loves of a She Devil and Puffball claimed that there are fundamental differences between the sexes.

She added that men should not be given such a hard time by career-minded women.

‘Life is much better, because you are not dependent on the goodwill of men,’ she continued, referring to the growth of women in the workplace.

But the trouble is, the battle became too fierce, and the whole culture encouraged women to believe that men are stupid, useless creatures who are the enemy.

‘They just don’t want to commit to you, and why would they when you are a busy working woman who can look after yourself and probably goes to bed easily with them?’