You are here: Home / Archives for misogyny

Last summer, I was privileged to listen in on two fascinating online debates between pro-life and pro-choice activists.

The first debate was hosted by Harvard Right to Life and Massachusetts Citizens for Life. It featured Stephanie Gray Connors, an astoundingly articulate pro-life activist, gifted apologist, published author, and founder of the Love Unleashes Life ministry. The pro-choice representative was infamous ethicist Dr. Peter Singer, who is often known for his controversial comments about disabilities, including asserting that parents should be permitted to euthanize children with disabilities like Down Syndrome and spina bifida.

The second debate was a joint effort by three student clubs—the Health and Medical Law Society, Students for Free Speech York U, and Youth Protecting Youth—at York University. Maaike Rosendal, who works for the Canadian Centre for Bioethical Reform, similarly did an extraordinary job communicating the pro-life position with compassion, clarity, and conviction. The pro-choice representative was Dr. Fraser Fellows, a now retired late-term abortionist.

While I of course appreciated the lengthy and in-depth debate, I couldn’t help but notice that there was a clear gender division. In both debates, the pro-life movement was represented by a female speaker and the pro-choice movement was represented by a male speaker. This seems to run completely contrary to the mainstream mythology that the pro-life movement is filled with grouchy old Catholic men wanting to force their beliefs and rosaries onto women (seen, for instance, in the “keep your rosaries off my ovaries” chant) and that the pro-choice movement is filled with female feminists who are resisting male oppression (see, for example, the “no uterus, no opinion” slogan).

I do not find the fact that these debates featured female pro-life speakers and male pro-choice speakers as inherently problematic or particularly surprising. As someone who has been involved with pro-life activism for over a decade, my experience with the abortion debate is that women make up the vast majority of the pro-life movement (contrary to the stereotypes peddled by abortion advocates). And, as someone who has been a student of this issue for the better part of 13 years, I’m also very alive to the fact that men have been intimately involved in promulgating and perpetuating the practice of abortion (including the all-male group of judges in the Supreme Court of the United States Roe v Wade decision, the mostly male group of judges in the Supreme Court of Canada R v Morgentaler decision, the mostly male politicians who will have crafted the permissive abortion regime in Canada, and the many male abortionists who have performed countless abortions over the course of their careers – including the venerable Henry Morgentaler himself).

And so, we return to these two debates. I think these two debates make it quite clear that there is no such thing as the mythical anti-abortion male mob seeking to enslave the bodies of the pro-abortion female freedom fighters. Stephanie Gray Connors and Maaike Rosendal are eloquent, articulate, and passionate pro-life women who have committed their lives to being a voice for the pre-born, including taking a stand in public debates against the pro-choice men who seek to preserve the status quo on abortion.

In short, contrary to how pro-choice activists and pro-abortion feminists have tried to frame this debate, there are women and men on both sides of the issue. To frame the issue of abortion as being about women only—women’s rights, women’s interests, and women’s efforts—is patently untrue and deliberately misrepresentative of the depth and breadth of the issue.

I am not someone who believes that only women should have a voice on the issue of abortion, which has severe consequences on men and women across the country.

If there can be pro-choice men like Dr. Peter Singer who defend abortion access and pro-abortion men like Dr. Fraser Fellows who perform abortions, then there can also be pro-life men who work to protect vulnerable pre-born children and promote a culture of life.

This is not simply a woman’s issue. It is ultimately a human issue.

This is not simply about women’s rights. It is ultimately about human rights. 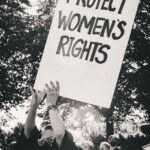 Let me first say that the #FHRITP trend is misogynistic and demeaning, and I applaud Shauna Hunt for not being cowered by the men who were harassing her. Shawn Simoes, the ridiculously unlikable man who has been fired from his job after being recorded supporting the #FHRITP trend, is not a popular guy at the moment with good reason, and I doubt he will be able to escape his social media footprint anytime soon. However, I wonder if firing him, though it is completely understandable, will actually address the underlying problem, which is misogyny itself. We have all united in our disapproval of Shawn Simoes, and this has provided us with the illusion that in terminating his employment (in which he earned a substantial salary of $106k, which is always highlighted in the news coverage to emphasize the high level of justice being carried out) all is once right again. But I have to wonder, is all right in the world once again?

We’re all appeased by the outcome: Man says vulgar thing, man is punished. But men do say vulgar things, a lot in my experience, and sexual harassment takes place in nearly every workplace I’ve ever been in or heard of. This is a problem, is it not? Violence against women? Misogyny? Is firing Shawn Simoes going to fix all that? I think French theorist René Girard would argue that it simply calms us back into accepting the culture and the society the way that it is, but leaves it ultimately unchallenged and unchanged. If Simoes is a scapegoat, “scapegoat” does not mean he’s innocent, simply that he’s fulfilling the role of being punished in order for the social order to continue unchanged.

Human beings are fundamentally imitative creatures. We copy each other’s desires and are in perpetual conflict with one another over the objects of our desire. In early human communities, this conflict created a permanent threat of violence and forced our ancestors to find a way to unify themselves. They chose a victim, a scapegoat, an evil one against whom the community could unite.

Again, “scapegoat” does not imply Shawn Simoes is innocent (he’s a jerk, we all agree), but should we, rather than being calmed down by his example, instead be ripping apart the seams of the culture that created him? There are millions who enjoy this degrading meme, and there are millions who are also watching pornography and the brutalization of women which therein informs things. Prostitution, trafficking, rape, the making of women into consumer products, this informs things. Firing Simoes doesn’t address this and can actually serve in the interest of furthering the REAL LIE, the REAL problem, the myth that mysogony is getting less and that women are better off now in our culture simply because they make more money. This affirms our culture, and tells us everything is okay when it’s not (I’m suddenly feeling like the reporter in that scene from Network!).

Shouldn’t we be getting mad instead of celebrating the sacrifice of our scapegoat? 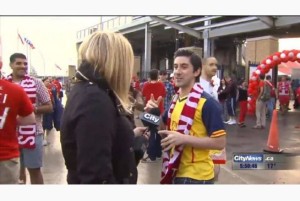 I do think it’s important to understand what pro-choicers are thinking. Incidentally, I use the term “pro-choice” to be conciliatory, though I think that term–all terms in the abortion debate, in fact–fall quite short of what is really going on. Or perhaps better put, they are themselves clichés that create tension and raise up stereotypical images. Ie. Not Helpful.

Anyhoo, so I read blogs like this with interest. Not to make fun, which admittedly would be easy enough, but with an acceptance that this view is out there–and it makes sense to some women. And I really do wonder why. Because it makes no sense at all to me.

Anti-choicers like to defend themselves against the charge of misogyny by saying they simply believe that life begins at conception.  What they fail to understand is that “life begins at conception” is a misogynist statement. It’s the erasure of a woman’s role in making new people, and a claim that the only effort that counts is the effort a man put into ejaculating.

I’ve been invited to talk at a university campus in the fall about why abortion is an injustice for women–will be a sceptical, if not outright hostile audience. But that’s what I believe–not only is abortion not a right, but rather marks a grave injustice in particular for women. So I plan on putting a lot of effort into that paper–it’s months away but I’ll post it when I’m done.

Oi ve. Some of these media commentators, Heather Mallick first and foremost, are like little kids.

The slurs continue. Here, and here we read about threats made against Heather Mallick, the result of her now infamous Mighty Wind column.  I decry those threats. But I can’t help but think that Mallick set the tone and can’t now pretend she is above the fray. Her words–certainly not an example of brave decorum in an otherwise alarmist world:

Her response to the threats? She is quoted here as saying:

The responses to my column proved me correct about the extreme right in the United States: they have a great misogynist rage in them,” Mallick said in an interview from Toronto on Saturday.”

Not liking Heather Mallick does not constitute misogyny. If that’s the case–then the better part of Canada is misogynist, too.

Again, I am struck by how crass and derisive the language the loony left uses to describe sex is. Has any conservative commentator characterized a consensual relationship in such vulgar terms? Aren’t we supposed to be the uptight prudes, while they are all in favour of anything at all, as long as it’s consensual?