You are here: Home / Archives for Heather Mallick

Portions of Ms. Mallick’s column do not meet the standards set out in policy for a point-of-view piece since some of her “facts” are unsupportable. She may, of course, resubmit her column taking account of our editorial standards. The editors are free to, in fact obliged to, exercise appropriate editing standards.

I used to be a fact checker. Yes, magazines usually have a department dedicated to driving ambitious, young journalists to insanity, by having them confirm the facts as written by others.

There could have been no fact check that would have caused this column not to run.

Fact checker: “Having called some male Republican’s wives… it would seem sexual satisfaction is, er, high.”

This apology from the CBC is grand, except it isn’t worth the paper it’s written on. They entirely fail, consistently, to note there is another set of views out there and they monopolize the media with their views using my tax dollars.

On that note, if you want more bias…check this most recent “news” report on “women’s rights” and Bill C-484. How’s about interviewing those victims groups that support Bill C-484 instead of claiming there were none? How’s about challenging the opinion that abortion is a “woman’s right”? Yes, I know, it would have required research. And a fact check.

Or maybe the CBC has an official policy–something that goes a little like this: Slander now, apologize later.

Oi ve. Some of these media commentators, Heather Mallick first and foremost, are like little kids.

The slurs continue. Here, and here we read about threats made against Heather Mallick, the result of her now infamous Mighty Wind column.  I decry those threats. But I can’t help but think that Mallick set the tone and can’t now pretend she is above the fray. Her words–certainly not an example of brave decorum in an otherwise alarmist world:

Her response to the threats? She is quoted here as saying:

The responses to my column proved me correct about the extreme right in the United States: they have a great misogynist rage in them,” Mallick said in an interview from Toronto on Saturday.”

Not liking Heather Mallick does not constitute misogyny. If that’s the case–then the better part of Canada is misogynist, too.

Again, I am struck by how crass and derisive the language the loony left uses to describe sex is. Has any conservative commentator characterized a consensual relationship in such vulgar terms? Aren’t we supposed to be the uptight prudes, while they are all in favour of anything at all, as long as it’s consensual?

Take a look at this photo and describe Sarah Palin and her family, in your mind: 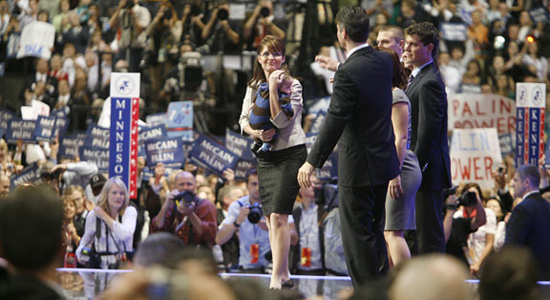 And then compare to this:

Really? Only question remaining is why Mallick didn’t light into the seven-year-old. Heck, why stop there–must be something insulting she can make up about the baby.

In historical studies, as in journalism actually, they teach you not to trust one eyewitness. This must be why.

Tanya adds: I must admit, Track did look a little stunned. However, something tells me it may have had more to do with the crowd of thousands cheering for him.

When pro-choicers want to make fun of pro-lifers, natural family planning is referred to as ridiculously anachronistic, associated with the “rhythm method,” and as if that were not bad enough, with “religion.” Apologies for this link, but it serves to highlight my point.

But when they agree that women’s health is not well-served by shots of hormones and surgery, natural family planning is called body literacy and fertility awareness.

I don’t care what you call it (and am not an expert in either). But let me personally applaud those pro-choicers who truly support women’s health by being against those regularly-timed shots of hormones.

This comes up because a friend attending a government-funded Mom and Baby health session was treated to an exegesis on birth control. (Odd choice, that. Is the line of thinking “you have a baby–you couldn’t possibly want another? But I digress.) It included no information on body literacy/NFP/fertility awareness.

I support pro-choicers who support body literacy. Because the ultimate in body literacy is knowing that the fetus growing inside you is not a blob of tissue that is easily disposable. They aren’t of the same opinion. I know that. But these are the pro-choicers with whom I share some common ground even if we have not come to the same conclusions.

Sorry about the delay on this. Here are my thoughts about the Morgentaler and the law conference I attended on Friday last week.

Toronto-January 25, 2008: Henry Morgentaler is a frail old man, who walks with some difficulty and needs help on stairs. He sat at the front of a lecture hall at the University of Toronto’s prestigious law school – some 200 students, doctors, activists and lay people in the audience. The average age was probably mid to late 20s, though there were also a fair number of grey heads in the crowd.

Vicki Saporta, president and CEO of the National Abortion Federation opened the event, with the dean of the University of Toronto’s law school, Mayo Moran, looking on. Saporta lauded the efforts of Morgentaler (and gave him a hug) but remained concerned about further anti-choice action, and limits on access.

And access became the most common thread of discussion for many of the speakers: Abortion should be “available, accessible and acceptable” (Joanna Erdman’s phrase, UofT faculty of law). After Saporta, Colleen Flood, Canada Research Chair in Health Law and Policy introduced Morgentaler.

And so a standing ovation later, the man himself rose to speak. Morgentaler’s voice was weak; the words predictable. He is proud of his efforts. “I believe the world is a kinder, gentler place because women have the right to make choices,” he said. His work

marks a milestone in the emancipation of women…

After he was done, another standing ovation – pro-choicers herald the presence of Morgentaler as if it was 1950 and Elvis Presley were in the building – it’s all weak knees and breathy excitement merely to be near him.

The morning was devoted largely to… you guessed it – access. Lorraine Weinrib, faculty of law at the University of Toronto, mused about how doctors are protected from performing or referring for abortions. “How did it come to be about protection for doctors, not women,” she asked. She also spoke about how the Morgentaler decision was the first time that she heard the sentiment expressed publicly that

Shelley Gavigan of Osgoode Hall Law School appeared nervous throughout her talk and acknowledged at the end that perhaps pro-choicers would be wise to acknowledge the “dominant ideology” of the unborn child:

Dawn Fowler of the NAF emphasized how few late-term abortions happen in Canada for social reasons. But then a particularly enthusiastic pro-abortion conferee from Holland stood up to ask this:

Sometimes women need abortions after 24 weeks, even for social reasons, and so why doesn’t Canada offer this?

Fowler replied that this lack of access is “physician driven.”

Garson Romalis, abortion provider in BC, spoke of his own work as saving women’s lives with some particularly distressing examples of a woman with six feet of bowel outside her body, who he was able to save, another jaundiced with infection, but she died. He spoke of how unique his specialty is because women are so completely grateful. “It is only my work where women say not only ‘thank you,’ but also ‘thank you for what you do.'”

And there were also interesting offline discussions: A very young woman from Canadians for Choice explained how, in spite of good access to clinics in the Toronto area, many women still self-abort. “You can find out how on the internet,” she said. Her concern? That there is still stigma attached to abortion, so women won’t come in to the clinic. I asked her how she hoped to combat the stigma – a genuine question, which was met with confusion. She reverted back to… access. “Some women just can’t get to a clinic,” she said, “What if you live in Scarborough [a suburb of Toronto] and can’t afford the bus ticket to Toronto?”

I was not able to stay and listen to the last session, which included Heather Mallick, journalist and Carolyn Bennett, Member of Parliament. But simply seeing Mallick up close reminded me that the person behind written vitriol might be fun – Mallick made a joke in the sunny lunchroom that she would stand in one of the rays and get a tan. It reminded me of a quote from Margaret Thatcher:

It pays to know the enemy – not least because at some time you may have the opportunity to turn him into a friend.

And all the old-guard feminists rolled their eyes and said “turn her, turn her into a friend… are you saying women can’t be perfectly good enemies?”

I remain convinced that most pro-choice young women are more open to a pro-life message than we currently hope. The empty rhetoric at the conference, the neutral tones of the discussion, the complete and total failure to acknowledge the difficulty of having an abortion and in many cases, the deep and lasting pain for women – it all makes me more convinced of this than I ever was before.

Brigitte adds: Excuse me for rolling my eyes all the way to my shoulder blades, but really. Worrying about the price of a bus ticket from Scarborough to Toronto when between 4 and 5 MILLION Canadians have no access to a family physician is more than a little déplacé. It’s almost obscene.