You are here: Home / Archives for Globe and Mail

A woman gives birth and the couple sues for accidental pregnancy. Hi, hi. When sperm meets egg, is pregnancy really an accident? I used to think of accidents as unavoidable. In that view, the only accidental pregnancies are those that result from not having sex. But after consulting the Merriam-Webster online s.v. “accident”, I stand corrected. Accidents also happen because of “carelessness or ignorance” or by “lack of intention or necessity.” Following a vasectomy, pregnancy is certainly unintented and therefore (notice the lawyerly word) accidental.

What was not accidental was the physician’s manners. How’s that for adding insult to injury:

The 44-year-old man received a second shock when his urologist, Steven Smith, responded to Mr. Philion’s panicky phone call with a question: ‘How many extramarital affairs has your wife had?’ “

Tanya adds: Is this typical bedside manner for a urologist? So glad we have all those bits looked after by a gynecologist.

Read this morning over coffee:

This feature from the Globe & Mail. I will go on the record saying that the stigmatization, guilt and shaming of women who have abortions is wrong. It doesn’t make abortion right however. This quote caused me to reflect:

Twenty-four years later, Ms. McDonnell says, little has changed: “When the characters in a hip contemporary comedy like Knocked Up can’t even bring themselves to say the word ‘abortion,’ something’s still very wrong.”

Uh… could that be abortion??

On that topic, it seems that the writers of Knocked Up are not the only ones suffering from that affliction. See Fr. Raymond de Souza’s excellent commentary on Morgentaler’s nomination to the Order of Canada.

And on a lighter note, I never thought I would be linking to this guy — and for his defense, as a former Liberal speechwriter, he will probably be mortified at being linked to by a pro-life blog — but this article made me laugh out loud.

Have a great weekend.

Andrea adds: Pro-lifers never have to shame or guilt women who have abortions. They do it to themselves. Apparently, because the

abortion involves a web of complex physical and psychological processes that themselves pull us in two directions at once. It involves our bodies, our emotions and our spirits in a way that engages us on many levels simultaneously, and that ensures that our response will be anything but simple.”

And now in severely non-academic language, because you are killing your own offspring, which certainly would engage those emotions on many, many levels, indeed. Yeeesh. I’ll go on the record saying I’m glad for the stigma. It’s not that I have ever, ever, treated anyone who had an abortion with anything other than respect, and to be frank, in the same manner as I treat everyone. It’s that what the “stigma” here is, is our conscience: that guilt that kicks in when you’ve done something terrible, and you know it. No need for me to look down on someone who has had an abortion, I’ve experienced this terrible feeling for other reasons, at other times.  And if we “eradicate that stigma”–we would be paving over our consciences. People have been known to do it. But distancing your actions from your conscience so entirely is not generally a good thing.

The article in the Globe is called Under 18, and pregnant by design.

For many people, the narrative of teenage pregnancy seems fairly set: A young girl has sex, misses her period, takes a surreptitious pregnancy test and receives the shocking news.

She then must decide whether to kill the child or carry the child to term, both options often devastating to deal with. But there is another scenario that is alive and well, despite decades of access to sex education and contraception: Some teenage girls welcome the news.

Ok. Of course you know that’s not what the article says. It actually reads as follows:

But we all know what that means. Are you comfortable with this? Move beyond the “but she is in a tough spot, and she can’t afford it, and she’s really scared…” She had sex. She got pregnant. There’s no undo button. What are we as a society going to confirm as valid choices?

I’d hate to call this piece in today’s Globe paternalistic and simple, but what the heck. That’s what I think it is.

The situation highlights what pollsters see as an escalating political trend line: the Conservatives as the party for men, the Liberals as the party for women. … The Harper government was doing better with women earlier in its mandate, explained Mr. Nanos, with emphasis on such policies as health care. But as the focus switched to things such as defence spending and cutting taxes and a crackdown on crime, the support drifted away. … But now, as women progress on so many fronts, it is hard to find them or their causes in this governing party.

Really? And if we’ve progressed soooooo much, one would hope we’d have moved away from the idea of the One Unanimous Female Voice. (And the idea that women don’t worry their pretty little heads about things like defence and taxes.)

By now you’ve heard the story that the abortion rate in Canada declined in the most recent survey period. Good, and yet, really–not good enough.

If we take the Guttmacher Institute’s (research arm of Planned Parenthood, an American group) reasons for why women have an abortion, and we take the number of abortions in Canada, 96,815 for 2004-2005, approximately the following number of people were not born in Canada for the following reasons that year:

15,490 people died because the woman’s life would change too much

11,618 people died because there are problems in the relationship; the woman is unmarried

10,650 people died because the girl is too young

7,745 people died because the woman has all the children she wants

2,904 people died because the woman has a health problem

2,904 people died because the baby has health problems

968 people died because of rape or incest

(Average number of reasons given, 3.7)

I gather this is why we’re not allowed to question “a woman’s choice”: once you begin to question that, you wonder whether these are good reasons for killing people. Everyone, of course, draws their own line in the sand somewhere.

Oh, and yes, I’ve heard the “I hope you are a pacifist” argument—indeed, were a war waged exclusively against women and children, I would protest it. That’s all I have to say about that. 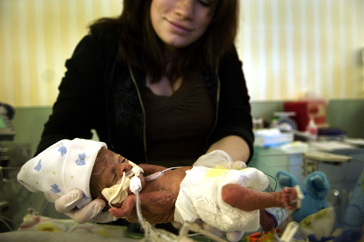 This is life, which no one said would be cheap or easy. This baby is toughing it out in the world at 25 weeks. Today the Globe and Mail discusses our failing healthcare system, which doesn’t have enough beds for these premie babies.

Rebecca adds: I hate to seem unsympathetic, as this woman seems genuinely to be in pain, albeit (as she acknowledges) because of her own choices. But isn’t this a symptom of some mental health issue or other – compulsive lying to avoid dealing with the reality of one’s life? At best, it’s Walter Mitty syndrome, and depending on how much she deludes herself, maybe something worse.

Andrea adds: Does this culture demand women deny themselves something they actually really want? I have wondered that, especially given that in one poll, now slightly out of date (1997, I believe) one in three Canadians said they desired three kids–a far cry from the 1.5 we currently have. But there’s something awfully strange about lying that you have children, when in fact, you don’t.  I believe there is a greater pressure to deny wanting to be a mother. That’s personal experience of course, and unscientific. But our birth rates go a little ways to proving it.

Tanya adds: This is quite a bit of presumption on my part, but as we make plans for our lives, we envision things going a certain way. Perhaps this women had a vision for her childless life that never came to fruition: travel, successful career, building a dream home…  In the end, many women sacrifice children for the sake of another ideal. But hopes for the future are like vapour, and we can do little to grasp them.

Sometimes I’m so grateful I had my daughter by “accident.” Otherwise, perhaps my own purposeful intentions would have kept me from the joy she now brings to my life.

Patricia adds: I agree with Andrea that there is pressure on women to deny wanting to be a mother. At least, on young women. In pursuing a society in which “girls can be anything”, we seem to have arrived at a society where a girl “had better be something” and motherhood isn’t enough of a “something” to count. That’s how you end up with the horrible scenario of mothers pressuring their own daughters to abort an unexpected and unwanted child. It’s better to be “something” first and then you can be a mother. Or not. And all of this is complicated by the fact that the erosion of marriage makes it risky for a woman to aspire to motherhood. The result is that motherhood is no longer a legitimate aspiration of a young woman, except if it’s fitted in after the fulfilment of meaningful personal goals. And I think that is hard on a lot of women.

Were women asexual prior to the 1960s? Michael Valpy seems to think so. Today, Valpy chose to kiss the ring of 1960s “choice” dogma, ironically, in an article about how women rejected church dogma in the 1960s. Valpy comments on the advent of a woman’s choice to be sexual, which, apparently, arrived finally, after millennia on the planet, with the birth control pill. Talk about repression! Prior to that, all sexuality was denied her—she was a mere slave to her reproductive system. “Birth control gave them the deliberate choice to be sexual, to move out of enslavement to fertility,” he writes.

There’s a fairly simple formula, here, that appears to have passed many by. Having sex may sometimes result in pregnancy, and this amounts not to being a slave but to being a parent—for both men and women (for all you parents out there, I’ll grant that sometimes it’s hard to tell the difference). Men didn’t come out scotch free, in this equation, sorry.